The Story of Navaraj Basnet

Navaraj
Basnet who hails from Thangpalkot VDC studies in Class Nine in Shree Raithane
Secondary School. He is an exceptionally talented kid. Last year he topped his
class by scoring the highest marks in all the subjects in all the exams. His
academic performance in class has been consistent and he has been topping his
class consecutively for 3-4 years now. All of his teachers in school say that
he is a very bright kid who picks up the lessons that he learns in class very

quickly and raises interesting questions. His friends further say that not only
is he a smart kid but that he is also very friendly and helpful. Apart from 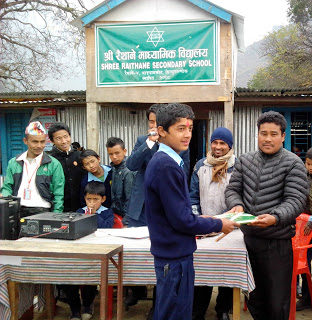 Navaraj receiving the prize on winning the Quiz Competition

being very active in his class, Navaraj eagerly participates in
extra-curricular activities as well. He performed extremely well in the quiz
competition that had been recently organized in his school and was awarded with
the title of ‘Best Performer’. Earlier when COMMITTED had organized the Star
Reader Program, he had been awarded with the title of ‘Star Reader’ for having read
the most number of books from the library as well. 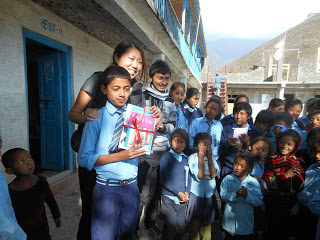 Navaraj being awarded the prize for being the ‘Star Reader

comes from a family with a weak financial background. His father is a farmer by
profession who struggles really hard to sustain their family which comprises of
Navaraj, his mother and his elder sister. His father also does odd part time
jobs like carrying load and people’s luggage in order to be able to fulfill his
family’s financial expenses. During the earthquake, their house similar to the
majority of houses in Thangpalkot VDC, Sindupalchok was severely damaged.
Navaraj and his family now live in the temporary house that they have built. COMMITTED
has been supporting Navaraj by providing him with a academic scholarship since the
last three years. Through the scholarship, Navaraj’s school tuition fees are
entirely covered for the whole academic year.