You wouldn’t be able to tell from their names.
Samir and Sagar are Newari if we go by their surname. But unfortunately with the archaic but traditional system of classifying people based on caste AND the absence of social mobility, the brothers are considered to be Dalits, one of the lowest, if not the lowest, castes. The reason? Their mother was one.
This is one of the small ways patriarchy in Nepal serves itself! In general, in traditional Nepalese communities, if you marry someone lower down the social ladder, you lose your high caste status. And as a child, you always get your surname from your dad but the caste you belong to will be the lower one if your parents belong to different ones! So, though very very patriarchal, the society allows classification of the caste of a child or children based on their mother, when she happens to be of a lower caste. Apparently, what I have heard is that partly because of all that, the instances of a woman marrying a lower caste man is considerably less than the other way around. In other words, the social pressures for a woman to marry within their caste is higher than for men, thereby limiting, in small way, women’s choices!
Returning to the brothers…to make a long story short, due to changes in the circumstances of their family, partly because of the mother being a Dalit, the two boys have fallen on hard times. (The plight and story of Dalits–and all other marginalised people and communities of Nepal, those from low socioeconomic backgrounds–is a long and complicated but important one, which I’ll have to reserve for future posts.) The boys are now taken care of by their elderly grandmother. A concerned school teacher told me about their plight during my recent visit to the village (to set up the Fishery and to look at SIP programs). Promising to see what I could do, I asked for a formal request for sponsorship of their education-related expenses, which they did (see image below). 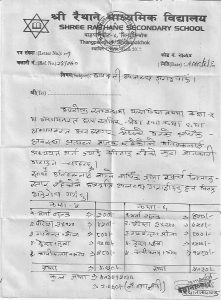 Sponsorship Request. (Click on the image for the original.)

Subject: Scholarship request.
Concerning the request, we would like to inform you that the financial situation at the home of the brothers Samir Shrestha and Sagar Shrestha, grade 5 and 6 students respectively, is so dire that they are struggling to continue their education.
The following is their education-related expenses for this year and we kindly request that scholarships be provided to them.
Combined total = 4030 + 5030
= 9060 (nine thousand sixty)
Signed and stamped
The Principal

I am very very happy to report that Nathalie Vignard, my friend and former colleague from my years at BMIS, in Malawi, has offered to sponsor the boys’ education all the way through!
On behalf of the boys and COMMITTED, thank you Nathalie.
* * * * * * * *
Dec. 13, 2013 Update
During COMMITTED’s visit to Thangpalkot Dec. 8-11, I spent some time with the two beautiful boys (and other children from similar socio-economic backgrounds). Both Sagar and Samir are doing very well in school. Sagar is 7th in a class of 35 students! Samir is 8th out of 24. 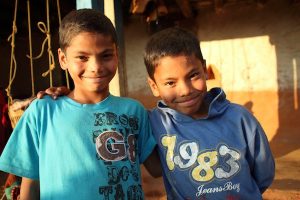 Sagar and Samir, in that order from the left.

I also paid a visit to their home. The boys live with an uncle, mother and grandmother on one of the two streets reserved for Dalits. I discovered that all Dalits in the Village Development Committee of Thangpalkot are segregated. The bothers themselves live in Dhamai Tole (Tailor Street). (Dalits comprise of tailors, cobblers, blacksmiths amongst others.) More about that in some other post, but here’s a “Thank you” letter from the School. 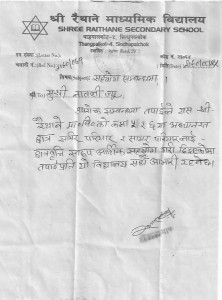 Thank you note from school.

Subject: About the sponsorship.
Dear Ms. Nathalie,
Thank you for sponsoring and thus providing financial assistance to our students Sagar and Samir.
Signed
The Principal